The Quest for Mountainshaper Reveals 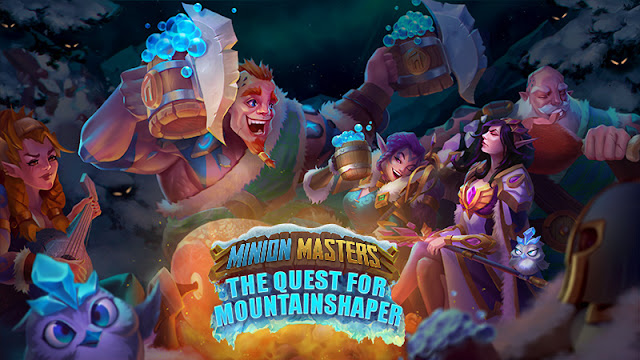 Our new Battle Pass Expansion is rapidly approaching, and we've got lots of juicy details about new cards and our Adventures mode to talk about.

First up is the Legendary card Fergus Flagon Fighter. This 7 cost beer brawler likes his Frostberry Brew so much that he turned his mugs into weapons! He'll go for crazy spin attacks while he pushes his way through hordes of enemies, but all the inebriation will cause him to get dizzy. Playing other Stoutheart cards near him while he's dizzy will allow him to get back on his feet again and get right back to it.

On a similar note, we've also revealed the Supreme card Glenn's Brew. This 2 mana Stoutheart spell packs quite a punch and is sure to revitalize anyone in the middle of combat. A random minion in the small area the spell uses will gain 100 Max health and be healed for 400. After 6 seconds, however, the minion will mysteriously vanish, never to be seen again...

View more revealed cards such as Frostfeathers, Woodsman, Caber Tosser, Leiliel's Vortex and more at our Update Site!. Next week we'll be spilling all the details on Adventures!

This week we're interviewing Steven from the Minion Masters Discord. Steven is one of our oldest players and contributes to the community in a variety of ways, and we figured we'd return the favour and let you know how awesome he is.

BD: Thanks for taking time to talk to us. Please introduce yourself and what you frequently do in the community.
Steven: Hello, I am Steven, also known as StevenEven. I am the main contributor  on the official Minion Masters wiki and I also am the one who keeps FFA's data spreadsheet up to date. You might also know me from: Moderating the official MM discord, the developer stream recap posts or my previous position at KPC.

BD: How long have you been playing Minion Masters for?
Steven: I have been playing the game since June 2017, so for about 2 years and 4 months. Time flies.

BD: What does editing the wiki usually entail?
Steven: Depending on the task it can be less or more complicated.

For example, when I first started I added "history" on each and every card and master, this meant i had to go trough all patch notes from all time and then write that information on the wiki in a structured manner. I am really proud of the result as new players can always get to look at how the cards used to be. Back when I started playing, I loved hearing the history of certain cards.

Other than that, i usually just need to add the cards and update others due to the balance changes.

When adding cards i just create a new page and copy another's card page, then edit it accordingly. When updating cards it's simply the addition of some text and tweaks of some numbers. It's actually really simple and anyone who knows how to type could do it.

I do however always make sure that all information is correct and integral, and that the history is updated.

BD: Which expansion has been your favourite so far?
Steven: It's kind of a tie between Guardians of the Crystal Spire (since it was the first season with brand new mechanics and minions), Rise of the Howling Moon (since it was the first time a master was added after I started playing and i also liked the theme) or Battle for Light's Reach (since it introduced factions, a feature i wanted and suggested from long before)

BD: Any shoutouts you'd like to make?
Steven: Shoutout to Videogamer77 and his group for being my friends since I started playing, they helped me integrate in the community and reach the point where I am. Also shoutout to FFA for, besides also being a friend, helping me evolve and improve myself both withim the community and in real life, as a person.

Steven can frequently be found hanging out on the Official Minion Masters Discord. Here's to you, Steven!

We've got tons of Minion Masters tournaments happening this weekend! The Challenger League will be running their Volco Cup 3 with a Halloween Edition on November 2nd at 1400 UTC.

Additionally, BadAsAFish80 will be hosting their 5th tournament on the 4th of November. Here's the details on that:

Building on and learning from the success of his previous 4 tournaments BadAsAFish80 is excited to announce that his 5th tournament is now open for registration.


Top performers get invites to the next Sinobii's Battleground Invitational featuring even more cash prizes! (The number of invites awarded depends on the number of participants).

In game content available to top performers including the Morellia Dynasty Skin to the winner.

Format is Best of 3 Double Elimination.


Registration is currently open and matches are scheduled to begin on the 4th of November.


You are given 3 days for each round to complete it at your and your opponent's convenience.


Choose a master to ban for your opponent for each round.

BadAsAFish80 is looking forward to seeing you in the tournament and wishes you the best of luck and should you have any questions encourages you to reach out to him on Discord (BadAsAFish80 :fish:#0275).

Meanwhile, behind the scenes...

We got these two to put on some funny looking costumes you might recognize. What could that be for? 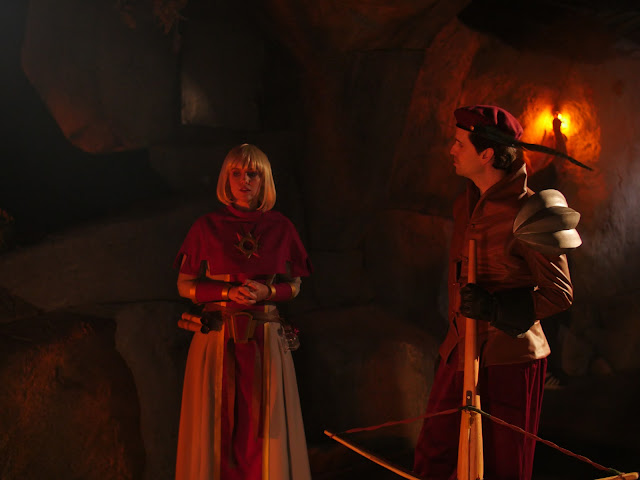