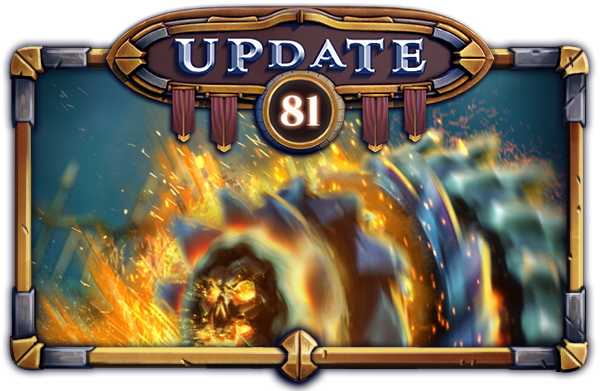 The Memote Mêlée has finally ended, with Team PuffChamp having the most members by a landslide. Thanks to everyone who participated and got involved with the community during the event!

But with that out of the way, we’ve got the long awaited Wheel of Doom release as well as some new features for our Streamer audience!

The Wheel of Doom is finally here! This legendary card is the easiest way to create some chaos on the battlefield and was the winner of the Best of House Valor event quite some time ago. Everyone who completed that event will receive a free copy of the card, whereas for other users it’s available for crafting as of this update. But what is the Wheel of Doom, you ask?

It’s a 4 mana line AoE spell, firstly. Think about it like how Milloween’s Arcane Missiles are cast in that regard, but with a larger radius. This spinning death wheel will deal two instances of 150 damage to any unit it comes into contact with (including your own), dealing a total of 300 damage (50% to Master tower). However, if any unit survives both hits, the wheel will shatter and the spell will end, leaving everything behind the unit unharmed. Get out there and cause some mayhem!

This new arena you’ll notice on the Arena selection will become available when the game detects someone is streaming through the Twitch Boost feature. It’s like the default arena, but your audience can pop in to cheer you on in your matches as puff fans! They can emote and jump around while you’re in the menus or while you’re playing the game using commands in twitch chat. You can find all of the currently available commands here: http://minionmaster.com/streamerboost

To disable this feature, simply select another arena. This is a first iteration, so we’re looking forward to getting your feedback on what we can change or improve! Make sure to give us your feedback on our Stomt, Discord or Steam Forums.

We’re also including an optional alternate UI designed to help streamers find the space to fit all of their graphics and cameras. Selectable in the Settings menu under either Twitch Boost or the Visual settings, this will rearrange parts of the UI to give you plenty of space at the bottom of the screen to put your webcam, streamer graphics, and anything else you want to store. Give it a try and let us know what you think!