No Minion Master's Monday, but Minion Master's Tuesday instead. Okay, let's see. Tuesday means another Dwarf stream is about to happen and a brief look on the weekend reveals that it's going to be crowded with tournaments. So let's jump right into it!

Who needs Dev streams if there are Dwarf streams?

Every Tuesday at 18:00 UTC, our Community Manager Erythais & eSports Coordinator Tengs are streaming live on Twitch for you. These streams are mainly meant to connect you even closer to us & to share the latest information about Minion Masters in general, upcoming patches, competitive Minion Masters, and even internal stuff with you.

These streams are also coming with giveaway codes every week! All you have to do is to stay active in the chat and maybe the RNG gods will choose you amongst others for cool in-game stuff. Another purpose is clearly having fun together. Erythais & Tengs are usually "on air" for 1 hour and they try to squeeze 2vs2 matches against viewers in, whenever the time allows it. Wanna beat them Dwarves? Then better tune in and hang out today at 18:00 UTC or just follow our Twitch channel in advance to get notified when we go live! 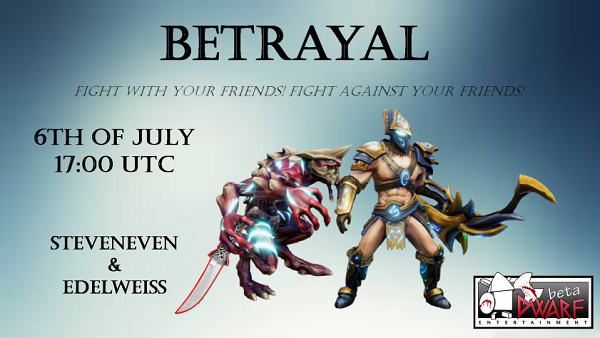 Besides King Puff Cup 23 being already announced, we have a crowded weekend regarding competitive Minion Masters prior to the next tournament of King Puff Cup Season 3. On Friday, July 6th at 17:00 UTC, Steven & Edelweiss will kick-off their first fun tournament with a truly unique format. In a nutshell: you bring a friend and play 2vs2 matches, while you will battle your own friend if you advance to the next stage. Sounds interesting? That's what we thought and since there is still time to sign your team up, here's the official announcement with all the information you'll need!

Not even 24 hours later, on Saturday, July 7th at 15:00 UTC, SwongoTV is hosting his first tournament. A fun tournament with lots of bans. SwongoTV seems to aim his chosen rules for the new players specifically because he banned all legendary cards & all Season cards from his tournament. There are more rules to find by following this link & after reading them all don't forget to sign-up!

That's all for today, Masters! Well, that's not entirely true, but we'll save anything yet sharable about Update 71 for the Dwarf stream today ;) Okay, okay, because the blog post was delayed, one little information at this point: the Best-of tournament of the Tri-Team Tourney is coming! Good luck on the flying arenas everyone and we hope to see you live on Twitch!