Community Happenings – A Challenge For The True Masters 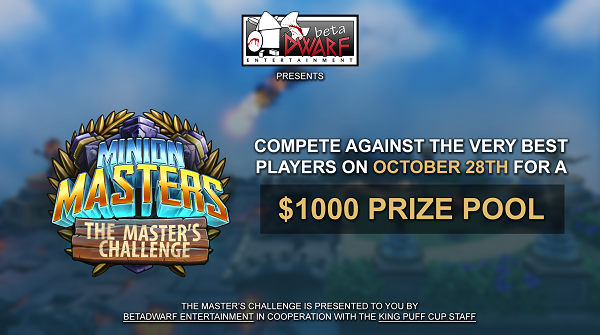 Welcome to the ‘Community Happenings’. This is our first Friday post with this new topic and we feel like there’s more to discuss than one can fit in one post. Well, October turned out to be a real busy month. We have so many things going on at the same time:
October really turned into Eventober! So, let’s talk about these topics from top to bottom.

We don’t need to explain the King Puff Cup, do we? Tomorrow, FFA, Dipshit and their crew kick off the 2nd Season of our well known Community Cup Series. They’ll start with a 2vs2 team battle tournament with a prize pool of 4,000 Rubies & 60,000 Gold. The broadcast for this event will happen Sunday at 19:00 CEST live on Twitch.

Monday Night Masters is a project of Salbei22 & Sinilil. They have planned a Swiss Style 1vs1 League with 18 participants playing against each other over the duration of 5 weeks. At the end of that 5 week period, the best 4 players will compete in a Double Elimination Playoff. The first broadcast of the weekly games can be watched live on Twitch on Monday 9th at 18:00 CEST.

Yesterday, we had a real big name streaming Minion Masters: Kripparrian. The former well known top player of World of Warcraft, Diablo III, Path of Exile and current Hearthstone player was streaming his first steps as a new Minion Master. To date, he didn’t convince his Sensitive Savage to join the Kripp Army. Maybe he will manage to do so on his next stream live on Twitch on Saturday.

Don’t know what the Sensitive Savage is? Well, here’s a short introduction of Scott:

Rumours are that a unique minion roams through the Eternal Woods. A furious fighter of fierce ferocity, hailing from the Highlands in the north. It was told, that Masters frantically search the lands for this minion. But nobody was able to acquire his strength, yet. The savage carries a secret and the trailblazers who have seen him speak in riddles: "Only those with a good shoulder will convince the savage to join them".

Kripparrian streaming Minion Masters is a huge thing by itself. But we also thought about our Community. Therefore, we changed the way ‘Watch & Win’ works: instead of a free key for Minion Masters, streamers can now win Supplies Codes for their audience. Just watch Minion Masters streams and win free supplies for your expeditions!

Want to surprise others with a free copy of Minion Masters? Well, here you go!

There’s a lot of discussion happening about Reddit, lately. We want to bring our Official Subreddit back to life and need your help, Masters! Some of you don’t like Reddit, some just want a simple forum, others enjoy the platforms for discussion as they are (Steam Community Hub & Community Discord). Well, we’re happy that these platforms are used so much, but Reddit is another platform we want to focus on. That doesn’t mean, that we’re aiming to switch everything over to the Subreddit! We encourage you to discuss with each other whatever platform you like the most. Reddit is just so well known amongst gamers, that we feel it’s worth it to bring the Subreddit back to life.

If you don’t like Reddit, we will not force you to use it. But we would like your help nonetheless even if it is just a comment every now and then. The vast majority of gamers seem to follow the known names of a given scene, the so called Community Influencers & Leaders. But not only the big names could make some impact, every single user posting and commenting on our Subreddit makes it more findable via the Reddit Mainpage and Google. Just head over there once in a while, leave your vote on some posts and comment or share a cool video clip! That’s all it takes, really. 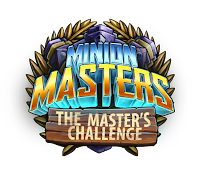 We announced a new challenge for you on Wednesday together with Update 46. It’s not a new boss in the expeditions and not just another competition. Not a new game mode, not a new Master (sorry for that). It’s just the biggest competitive tournament ever happening to Minion Masters since its Early Access! We’re proud to present you

From today onwards, you can sign up! But there’s one restriction: Only Grandmasters of the current season are allowed to compete against the very best players for a whopping $1,000 prize pool. Not enough incentive to participate? Okay… how about that:
Now, that you know you are competing for more than $1,000, here’s everything you need to know:
The sign up process is a little more complicated than you might know from the King Puff Cups, though. Since we don’t have a Tournament feature in-game yet, we have to make sure, that only Grandmasters are able to participate. Therefore, you have to do the following steps if you want to compete:
As easy (and complicated) as that. The reason for the Challonge account is simple, by the way: We want to have the matchups looking good with avatars instead of names only ;)

We’re sorry that this post isn’t only about you. But as it stands, we have to announce so many new things on a high frequency, that we needed that space. To make up for that, we will present an interview with Dipshit in our next weeks Community Happenings on the state of Minion Masters and its competitive scene. Don’t miss that!

For now, we advise you to play Minion Masters and reach Grandmaster fast! We want to see you compete in The Master’s Challenge.