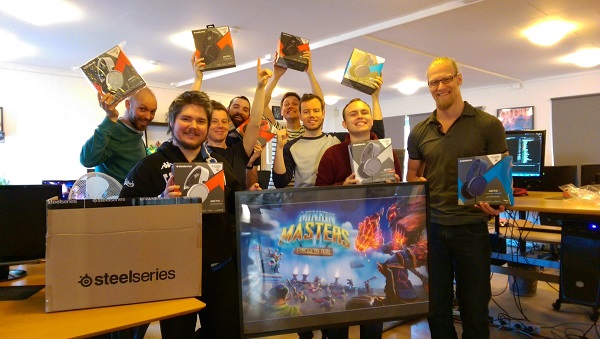 This picture was taken on Wednesday at our office. Happy developers after receiving headsets from SteelSeries. Hopefully, these guys will be more efficient, now that they don't need to move from desk to desk in order to talk to their colleagues. But that's not what we want to talk about. If one doesn't know who these people are, one might think: "They are happy and enjoy their time." But more important: This is a picture of a happy community.

Another exciting week ends. October - I mean - Eventober has just begun, but is already everyone's favorite. If we had to choose the biggest happening this week, our votes would clearly go to Kripparian. We want to thank Octavian "Kripparrian" Morosan again for his effort and time invested to promote Minion Masters on three streams and in a YouTube video! We're also proud to tell you, that we managed to get roughly 100% more players, to date. Definitely worth a mention!

If you missed Kripparrians video, here you go:

Besides that big name within the Twitch and YouTube community, we want to shout-out 'Thank you' to all our regular streamer! You guys are amazing and we appreciate your support in spreading the word by streaming the game.

There's two more things we want to point out from this week. The first thing is The Master's Challenge. A 1vs1 Grandmaster only tournament that comes with an incentive of $1000 split amongst the Top8 participants. This tournament is not about providing prize money, only. It's not about a huge prize pool during Early Access. The Master's Challenge is also a trial run for more regular events presented by BetaDwarf. Furthermore, this tournament is important for us to evaluate possible numbers of participants for the ESL Go4 Series. We're also closely watching the numbers of participants for the King Puff Cup and the development of the Monday Night Masters.

The second thing is something most of you might already know. fdmfdm is one of our developers and a well known person in our community. He's also owner of a unique hashtag called #blamefdm. While we don't want to encourage you to blame him, we want to show you guys, that we listen to our community: 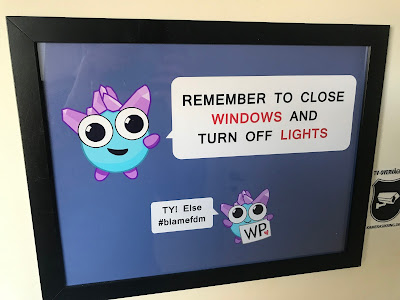 Taken from our office door

We mentioned in our post last Friday, that we'll present an interview with Dipshit. So here it goes!

Erythais: Hi Dipshit, nice to have you! Even though the vast majority of our community already knows you, can  you please introduce yourself? Mainly for the new players.

Dipshit: Greetings readers, I am everyone’s favorite Dipshit. I run the community discord and am half the leadership of the King Puff Cup tournament scene. I have been playing the game since December 3rd and am a Grandmaster level player. I’m considered to be one of the community filters for Betadwarf as well.

Erythais: You’re very active in the community indeed and part of the King Puff Cup staff. Where does this level of engagement come from?

Dipshit: Let’s call it passion. I believe this game has the ability to make it big and I try to help out where I can. I try not to let other people down, so I end up getting really involved in everything I touch. In the case of when the community discord was first founded, I was just a mod, but I was so active that I ended up as the head admin. And for the King Puff Cup, I wasn’t truly involved until the 3rd one when I was a commentator. And it was in July that I was moved up to the ranks where I am now.

Erythais: Let's talk about Minion Masters. The game is updated regularly. New features, new content, balance changes and so on. How do you feel about the current state of Minion Masters?

Dipshit: I believe it’s in the best state it has been in thus far. Many decks are technically viable all the way up until Grandmaster and it’s only when you’re facing down the best of the best that you honestly need the best decks in order to compete. I feel it’s a bit too easy to rank up these days, but I know that’s also been an issue of our less than stellar player count. But the solution to that, is that everyone just needs to help give their friends and communities a push towards our game. Once people see that the game is more than just simply a “Clash Royale” clone, they tend to become hooked if the genre is their type of game.

Erythais: We announced our aim to become an eSports title. Currently, we have the King Puff Cup, Monday Night Masters and The Master’s Challenge as main events. How do you feel about Minion Masters’  competitive development and the community?

Dipshit: I find it to be quite ambitious considering the size of both the community and the development team. However, it’s working. We have ESL looking at us and just waiting for us to give them the thumbs up to get started. All this game needs is a little bit more popularity and then it should cause a chain reaction. Having said that, there are still a few features that the game needs to truly ascend to the esports, things like a spectator mode and in-game tournament tracking. Of these, I know spectator mode is on the horizon.

As for the community, just about everyone that is active has participated in the tournament scene at one point or another. Especially at the higher tiers. So I believe it’s safe to say that the community really wants the game to be as competitive as much as we’re pushing for it. I mean, back during the first season of the King Puff Cup, the concurrent player count for the game was hovering around 160-230 and during that, we had over 80 unique participants show up to our tournaments to battle it out. And I find that rather fascinating. Normally the tournament scene for a game is some small niche of 1% or less, but we see upwards of half our community participating.

Erythais: We're absolutely surprised by the engagement of our community, as well. Let's come to the last question: Where do you see Minion Masters in 2 years?

Dipshit: Well next year the game will officially release and we’ll have the ESL scene running by then as well. So in 2 years time, I imagine this game has the potential to be the most popular card game based e-sport. It’s just a matter of getting the word out. 2 years might be too short to overcome a giant like Hearthstone, but the potential is definitely there.

Erythais: Thank you for your kind words and for the interview. Leave some shout-outs if you want to.

Dipshit: Sure I can do that. My first big shout-out is going to go to Betadwarf’s team. They’re one of, if not thee best development teams that I’ve interacted with in all my years. Not only do they actually listen to our feedback and actively engage the community on a daily basis in our discord, but they also sponsor all our King Puff Cups.

My other big shout out goes to 3FFA. Without him, the KPC wouldn’t be nearly as big as it is now and without his push, I wouldn’t be involved with it either I believe. It may very well have died off like the first tournament scene did way back in January. He also helps to keep me on track with day-to-day tasks with the KPC.

We don't know about you, but we feel like that's the perfect ending for this Fridays post. Dipshit is one of our most active members, indeed. But we want to thank our community as a whole for supporting Minion Masters in many different ways and giving us the opportunity to look like in the picture at the start of this post. Let's share that happiness with more people!