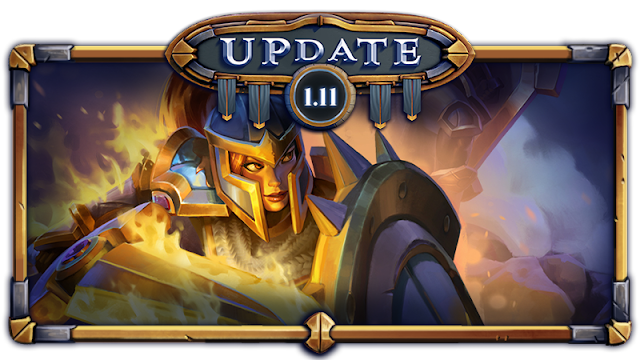 The Zealots of the Burning Fist have made their way to the jungles of Jadespark to join the fight! Log on to Minion Masters within a week of this patch and receive a free copy of this brand new Supreme Card! We’ve also got a set of big balance changes coming up aiming to significantly shake up the metagame, primarily by way of targeting low-cost “cycle” cards. 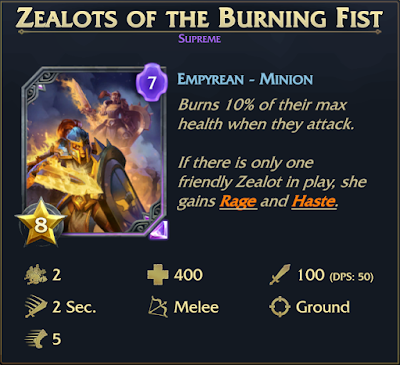 A copy of this card is available to all users for free if they log on from the 26th of March to the 2nd of April. Don’t miss out!

The Zealots of the Burning Fist are battle hardened soldiers of the notorious Order of the Burning Fist and are loyal to High Inquisitor Ardera, fighting with a reckless abandon that demonstrates little care for their own safety. This fervor allows them to hit harder than the regular Warrior, dealing 100 damage instead of the regular 70, but it comes at a price - With each attack, they lose 10% of their own health. But that's not all - If you only control one Zealot, it gains Rage and Haste, capable of outputting massive damage if they aren't handled with care.

The main idea behind this set of changes is to re-balance the value of one drops. We currently feel that the mana slot offers far too much value for what should be primarily included in your deck for the cycling value, and we generally want 1 mana cards to be on the same power level as a Mana Puff.

There's a lot of interesting play space in both the control style and bridge grab metagames, and we believe that by removing the efficiency that most 1 mana cards have, we can create a more diverse spectrum of choices for players to make when it comes to those elements.

Additionally, these changes are going to help pave the way for an upcoming Wild Cards rework we’re planning to do. You can expect to hear more news about this very soon.


Developer Comments
Armored Scrats have always sat at an awkward position of being intended as slightly tankier, annoying minions to remove, but we felt they haven’t ever been able to fulfill that role. We took some inspiration from our previous game Forced SHOWDOWN for this change, giving them an identity as a group of pesky scrats that sacrifice damage potential for safety from spell removal.


Developer Comments
This change primarily comes as a result of the significant increase in damage on the Nether Bat unit.


Developer Comments
Bridge Buddies was already a very strong card, particularly in spell-focused decks, and with the shift towards 2 mana cards being the predominant bridge capture methods, we felt that it would become too powerful of a tool in comparison to other options. As such, we’re reverting Bridge Buddies back to its original state, though the new mechanics of Armored Scrat should hopefully keep its buff relevant.


Developer Comments
Diona’s ability to place her traps directly on the bridges for a cheap capture was already a strong benefit to playing her, and we felt that if she still had a 0 cost trap that was capable of doing this with the wave of 1 drop changes, it risked her being too powerful.


Developer Comments
Part of what we felt was holding Gor’Rakk Gate back was the unpredictability of the summons. With Turncoat, it’s important you’re able to get as much value out of the affected minion as you can before your opponent gains control of the card, and not knowing its result made it too reliable to include in a deck. At the same time, we felt the card may be too dangerous if it remained at 2 mana with this consistency due to the huge mana advantage you could gain.


Developer Comments
We have two main objectives with this change - Firstly, to make it a spell and simplify its design while removing the awkward interactions the building could have with other game mechanics. Secondly, we wanted to remove the card’s polarising nature which came in way of frustration playing against it if you didn’t have any way to remove the card - Something that would have been a larger issue if it still retained its long duration while no longer being counterable.


Developer Comments
With the nerf to Illusory Cleaver, a card that long stood as the primary counterplay to Propeller Horde in King Puff decks, we wanted to rebalance the card such that it didn’t become as explosive, as well as potentially reducing the drawback of playing the card unactivated.


Developer Comments
With a lot of strong decks being hit by the changes to 1 Drop cards, we felt Ritual of Servitude may become too powerful as a knock-on effect of responses to their large minions taking longer to cycle to.


Developer Comments
Regarding the Mancer cards, we felt that the global effect ranges of the cards could often feel too oppressive against swarm strategies, in particular Ratbo decks. We wanted to emphasise their utility as combo cards by reducing this range while still keeping it at a relevant amount. We opted to reduce the Mana Cost of Blastmancer to suit this, however we found that Spiritmancer in 2v2 game modes was already considered a significantly powerful card that often times did not need the global range of his effect, so reducing his Mana Cost felt like it would overly buff him.