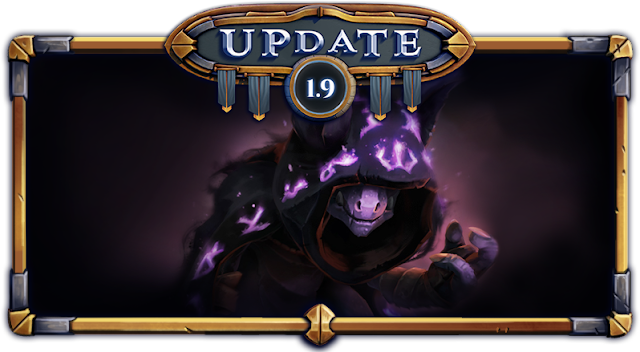 It’s the first BetaDwarf update of the decade! In this patch we’re releasing the new Community-voted Mal’Shar Shadowfork, as well as introducing a healthy dose of balance changes. This patch also includes a fix to the annoying Conquest bug that prevented glory contributions from being calculated correctly. With this update your Guild should have the correct amount of total Glory and the tiers you should have earned as a result. We’re deeply sorry for this issue and thank you for all the patience you’ve displayed.

Voted by our users in the Tri-Team Tourneys, this new 6 mana Shars’Rakk Assassin has honed his stealthy craft to perfection, and he’s more than willing to share his talents with his fellow demons. Every time Mal’Shar kills an enemy, he grants a friendly Voidborne minion the Stealth ability (But doesn’t give them the triple damage bonus).

Mal’Shar is available from Power Tokens or can be crafted for 2000 Shards. There will also be a special Mal’Shar Pack Shop Offer available once the shop offers rotate, so keep an eye out for that!


Developer Comments
Arcane Bolt was still struggling in performance after the buffs. With the introduction of the new Mana Freeze mechanic we wanted to tweak the card to implement it, as well as significantly improve the usability of the card.


Developer Comments
Bats Bats Bats as a standalone card has been somewhat underperforming lately, so we wanted to give it a small buff through opening the window in which you can gain value from it.


Developer Comments
Border Patrol’s high value combined with the ease of keeping a steady stream of Crystal Elf minions coming through repeated use of the card often made its pushes feel somewhat insurmountable to answer. By giving it Mana Freeze we hope to slow the deck down significantly without overnerfing the card itself.


Developer Comments
Legionnaires is a card that’s felt somewhat overshadowed by its competition at the mana cost lately, and we wanted to reinforce the Empyrean Army mechanic while retaining its identity as a bulky group of midrange melee minions.


Developer Comments
Following the changes to Arcane Golem, Milloween has been struggling somewhat, so we feel a small damage increase should help her for the time being.