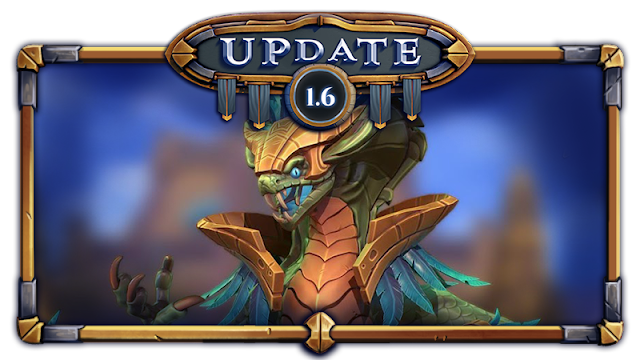 This Update we've got a big Quality of Life improvement coming through the much-anticipated Reconnect feature, and an assortment of Balance Changes such as the removal of Double Masters for Premade 2v2 teams.

Apologies for the slightly weird formatting on our blog this week, as there's been some technical difficulties with the Editor.

Our favourite Supreme Slitherer, Apep, has received a complete visual redesign in this update. Looking more vicious and cunning than ever, the self-proclaimed Serpent God comes with all-new sound effects and animations to match his new form. We’re super excited to release him to the playerbase, so please let us know what you think of his new design!

Coming in this update is a feature we’ve wanted to implement for quite some time - The ability to reconnect to ongoing matches! When the server detects that you have an unfinished match when you reach the Main Menu, you will be prompted to reconnect to load back into that game. This feature works for both 1v1 and 2v2 matches, and the match will continue as normal while you’re disconnected (albeit without your Master playing any cards). This also fixes the annoying circumstance of teammates disconnecting during the victory animation causing you a defeat.

2v2 Premade Duos can no longer queue with the same Master.

Arcane Bolt
Now has an indicator if it will kill or stun a unit
Now refunds 1 Mana if it stuns a unit
Developer Comments
Arcane Bolt often felt like a card that would simply remain “dead” in your hand if you couldn’t find a good application for it while playing against your opponent, and the specific health threshhold could sometimes be unclear as to the outcome of the spell. By adding a QoL indicator and a refund upon stunning a unit, we hope it improves the usability of the spell significantly.

Bahra's ability no longer roots units that are played after he is summoned.
Developer Comments - This was a particularly frustrating interaction with Bahra as it would often result in units you play as a counter being rooted helplessly. While we don't view this as a huge nerf, it should make counterplaying Bahra a great deal less frustrating.


Damage 35 > 40
Developer Comments - Having long been outshined by its peers, we decided to give it a little bump up.


Shock damage 100 > 75
Developer Comments - As one of the most played cards for a while, it had a tendency to shut down entire strategies on its own.


Now gains triple Health and Damage from the 5th time she is played and onwards.
Developer Comments - Demon Warrior has struggled a lot since her rework due to how hard it could be to activate her ability. Matches generally started getting faster and her excessive damage was often unnecessary, meaning that she was hard to justify using at the 6 Mana slot. By rescaling her like this we intend to keep her HP total when activated the same, but scale back her damage in return for making her significantly easier to activate over the course of a game.


New Ability: When Disruptor Puff reaches the middle of the bridge, it teleports to the other bridge, then teleports back every 6 seconds.
Developer Comments - Disruptor Puffs had a particularly problematic design where it would significantly hinder your opponent's ability to play the game, and in certain circumstances could snowball to unfair levels. However, the card didn't see much play due to its low power level outside of the dream scenarios, and we were reluctant to buff it because of its oppressive potential. This new design aims to fill the gap of a 1 mana card that can capture both bridges left behind by the change to Scrat Pack, but keeping it distinct with the removal of the versatility that made the Scrats too effective.


Now has a 20% chance to cast both Healing Fireball and Fireball at the same time.
Developer Comments - Gambler's Ball, while a fun concept, was often completely ineffective in most scenarios, requiring a specific scenario (tanky minions fighting other tanky minions) to guarantee you any sort of value. We saw an opportunity to reinforce the identity of the card and its "Gambling" effect with this new third effect, and we're hoping it makes the card more fun to play with overall.


Now have Empyrean Army: Gain Rage.
Developer Comments - One of the least played, worst performing cards. This certainly needed a buff, and we wanted to focus on the damage they would deal in direct encounters rather than improve their survivability, having a decent health pool for a 3 mana card already.


Magma Cannon
Health 300 > 350
Developer Comments - Magma Cannon was a low performing card that we felt needed a slight lift in order to perform at an acceptable level. We opted to increase its health so that it could perform direct trades a little better, but it still remains vulnerable to cards that could output significant damage to it quickly.

Milloween
Perk 1 changed: Now adds a single-use Arcane Golem to the deck every 30 seconds.
Arcane Golem Speed 2 > 3
Developer Comments - One particularly problematic element of Milloween was that she could focus on creating a high cycle focused deck that relied very little on spells, and hoping to draw the game out to Perk 3, at which point she would be able to drop Level 5 Arcane Golems onto the field at a rapid rate. This would create insurmountable walls of damage and health that were extremely difficult to push past, with most high cycle decks being able to get multiple Golems onto the arena at a time. This was a far cry from her intended design as the Spell-based Master as it was the objectively superior way to play her, whereas lower cycle decks that wanted to make as much use of Spells as possible would have Milloween's key minion on the field less often. With this change we hope to buff the lower cycle, spell-heavy Milloween decks significantly while significantly reducing the benefits of cycle on her.

Ritual of Servitude
Summoned units have a maximum mana cost of 6.
Developer Comments - This card certainly took the meta by storm, as it provided an immense power boost to high cost decks with its huge discount. We’ve opted for this change to try and reign in the extreme decks somewhat without hurting the more reasonable mid-range variations.

Spawn of Fury
Now targets a random Minion within a small AoE.
Developer Comments - One core issue that held Spawn of Fury back from being an effective card was its requirement to have a completely empty board state before it could be used reliably. This often left you open to removal spells, or just created a very predictable push that could be either dealt with or simply ignored as the opponent pushed down the other lane with the knowledge that you had spent all your mana on a Spawn of Fury combo. With this targeting change we hope to alleviate that scenario and make the card easier to play.

Stun Lancers
Health 150 > 130
Developer Comments - Stun Lancers were one of the most successful cards in recent patches after their various buffs, providing a huge amount of value for their mana cost. With this change we’re hoping the added vulnerability can help make them a bit less reliable without the proper support.

Sun Burn
No longer damages friendly units, but still grants them Rage.
Developer Comments - The friendly fire damage of Sun Burn often made it unappealing to play in its optimal scenarios where you remove enemy units (usually a pesky Dragon Whelp) while buffing up your Minion at the same time. Outside of some niche combinations such as Blood Imps with Lycanthropy, the damage was too much for everything but the largest units to be worth the tradeoff.

Werewolves
Attack Speed 1.0 > 1.1
Developer Comments - The Werewolves proved to be very explosive units, and could be hard to defend against if you didn’t have the right defensive tools. We’re hoping this slight nerf should make it a little easier to deal with them without having the perfect answers in hand.

Altered Ritual of Servitude’s wording to further clarify that its effect includes other copies of Ritual of Servitude.
Added search terms for Bronze, Silver and Gold to find Cards with the respective Glory Frames.
Modified the News screen to better support variable amounts of items.

Fixed Stormbringer incorrectly having 40 damage.
Fixed the Card Collection counter on the Profile screen being missing.
Fixed Conquest Cards counting towards a card’s Glory.
Fixed Xbox users not being able to scroll through league ranks with LB.
Fixed Cursebearer’s Aura visually lasting 5 seconds still.
Fixed Hypnotize disabling Wreckinator’s Slam and Bam.
Fixed Crystal Archers’ description in German being broken.
Fixed an instance where Morellia’s Book of the Dead could break Armored Escort.
Fixed an instance where Wreckinator could moonwalk after being stunned.
Fixed an instance where Wreckinator could become stuck after destroying a building - Thanks FingersTitan!
Fixed Lycanthropy transformation removing Haunting Hugger - Thanks Omicron666!