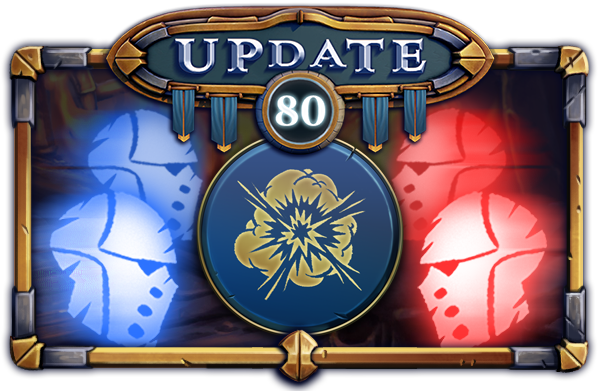 The Memote Mêlée is nearing the end, with only 7 days left, you must hurry and get your time-limited memote!

This week we’ve got some great new stuff for you Masters - 2vs2 Mayhem functionality!
It took some work, but you can now join mayhems with your friends or play with randoms in addition to playing 1vs1!


--- Developer comments ---
The 2 mana refund mechanic of Crystal Construct was originally intended to make the card act as a “3.5” mana card. Unfortunately, sometimes experiments don’t work out, and the card ended up being stronger than we would have liked. The mana refund was also a little problematic in Mordar decks as it allowed him to snowball quickly with a unit that was easy to support with any other backup.


--- Developer comments ---
Rabid Prowler’s power level after the recent buff made it a far more oppressive strategy than we had hoped for. The combination of both Rage and Frenzy required a near instant reaction to avoid the card dealing massive amounts of damage to either the minions or your master tower.
This change leaves us with a final movement from Frenzy to Rage, where Rage should have more impact on the Rabid Prowler because it has more synergy with the pounce.


--- Developer comments ---
Dragonball had been a popular card since its inception due to its versatility combined with how many decks ran 3 mana cost minions such as Plasma Marines, Xiao Long, etc. The card was ultimately a bit too strong as a result, and the conditional effect never really felt like something that you had to actively consider. By making it a 4 mana cost requirement there should hopefully be more of an involved thought process when playing the card, but still retain the exceptional value the spell was known for.


--- Developer comments ---
Crystal Sentry was very slightly underperforming to our expectations. Its health was just shy of making it useful as the ranged tank we were hoping it could be.. Therefore we’re hoping a minor stats increase can make the card a bit more viable.


--- Developer comments ---
Musketeer, while providing a strong niche counter to some specific units and having solid DPS, would often struggle to see use outside of its specific scenarios due to its low health, which made it vulnerable to multi-unit cards or ranged attackers. This minor HP increase shouldn’t take away from its role as a glass cannon parry unit, but still, give it an extra boost in survivability.


--- Developer comments ---
Dragon Nest has definitely presented a challenge to us, and since the last changes made, it hasn’t seen much use.
We felt it was time to try a middle-ground between what we’ve had previously, and this change should make it easier to get on the field, but still possible to deal with for a variety of decks, as the summoned dragons remain flightless.


--- Developer comments ---
Crossbow Dudes would typically feel like the “bad” outcome of Raging Reinforcements, as their overall DPS and low survivability generally made them inferior to the Warrior and Dragon Whelp. By adding a fourth Crossbow Dude their DPS is more in line with the other options and should become a strong unit for supporting other units.


--- Developer comments ---
One of the major issues with Cannon Roller was that it would have a hard time attacking ranged minions, causing it to inevitably take large amounts of damage. While it was intended to be weak to Ranged enemies this leaves it with two heavy counters; flying and ranged. This Attack Delay buff should help to reduce the amount of chip damage it takes, making ranged slightly less effective, but still a counter.