Update 78 - Guardians of the Crystal Spire 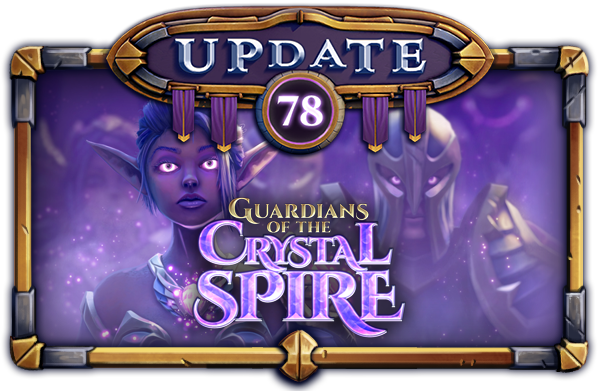 The third Battle Pass Season is here! Guardians of the Crystal Spire is the new season with the Crystal Elves having their debut as a new faction in Minion Masters!
We’ve revamped the Battle Pass with more rewards and better accessibility, and we have a ton of balance changes to come in this update as well. But that’s not all - we’re also starting a new event - Twitch Memote Mêlée! Let’s go full meme, Masters!

If you need to catch up on the new cards quickly, check out the official Guardians of the Spire reveal video!


--- Developer comments ---
Screaming Scrat, while definitely have an unusual design worthy of being a Legendary card. Unfortunately, it was much harder to use than expected, with the taunt not being able to achieve enough value to justify its mana cost. With this change it should be a fun and impactful small card you can use without being punished too much in terms of mana.


--- Developer comments ---
Sun Burn was simply too expensive to use in the majority of situations it was designed for, and its versatility was held back as a result as you would have to try and obtain optimal value from either of its effects. By reducing it to 3 it should make its abilities far more efficient to use.

--- Developer comments ---
Stormbringer, while he was in need of a buff, was unfortunately overtuned and became very frustrating to play against as he either whittled down your midrange units or made a lot of small cards completely irrelevant in his matchup alone. Hopefully by reducing his damage a small amount, he can still be an effective master without being too oppressive to play against.


--- Developer comments ---
One of the oldest cards in Minion Masters, we’ve tried to buff it over time after it got phased out by better AoE cards like the Flame Imp, but ultimately this was unsuccessful. As such we have decided to redesign it and give it a new purpose as the cheap AoE with a major weakness.


--- Developer comments ---
A card that was initially perceived as slightly risky to add to the game, Clear Skies ultimately didn’t seem to have enough value for either the healing or the buff removal at 4 mana. Hopefully this reduction emphasises those applications.


--- Developer comments ---
Banner Man was a controversial card due to its ease of gaining value against spells in the hands of a skill player, with his instant effect blocking incoming spells with single damage instances. By increasing it to 3 mana you still retain the effectiveness of its ability to counter spells, but is less effective for cycling or bridge control.

--- Developer comments ---
Empowered Soul Stealer saw some minor interest, but it overall failed to meet expectations in its performance. However, we don’t believe a major balance change is required to improve the card to be viable, so a minor soul increase should make its condition more impactful.


--- Developer comments ---
Frenzy was simply not worth it on a card that relies on its high impact damage to provide the basis for running the card, especially when locked behind a conditional effect on a high mana cost minion. By adding Rage to the card, it should be far more appealing to work into your deck.


--- Developer comments ---
Ravenous Swarmers ended up being too specific with its relatively minor effect for it to be worth running over Swarmers. By greatly extending the rage of its Condition, the card should now be a great option in any deck that runs spells, but applicable in more situations.

Guardians of the Crystal Spire

These Crystal Elves are deadly at long range, but fragile up close. Their Mana Surge (+50% Attack Speed while you have 6+ mana) enables them to empower their attacks even further.


This relative of the Guardian acts as both the shield and stockpile for the magically dependant elven army. A huge chunk of HP with limited offense options, the Construct will grant its master +2 Mana when summoned.


A tough elite warrior that uses his fancy (and deadly!) glaives to cut the opposition down to size. He also comes with Mana Surge (+50% Attack Speed while you have 6+ mana), making him a semi-tank more than capable of defending himself from ground and aerial assault.


A long ranged AoE caster with more fashion sense than practical combat clothing. She’s able to wipe out groups of enemies from afar thanks to her strong range and Mana Surge (+50% Attack Speed while you have 6+ mana) - Just make sure you keep her safe.


Summons 4 Mana Puffs at the Master Tower for each team. Mana Puffs are attracted to the flow of mana, but you can never know what they will do when they appear - besides look cute!


Summons two Crystal Sentries to escort the next Ranged Minion you play. It’s good, efficient protection on the fly that can pack a serious punch.


This powerful Elven magic will stun the highest health unit in its radius, or instantly kill it if it has less than 400 Health. Use it to dismantle pushes or take out annoyances before they get out of hand at a premium.


Sworn to defend the Crystal Spire, Lord-Sentinel Thelec comes with his own legion of Elves. If you have 4 or more spells in your deck (including Master perks), Thelec will summon 6 Crystal Archers in a line directly behind him. It’s an all-in-one push package, but those archers are as fragile as ever.
He also has the Mana Surge ability (+50% Attack Speed while you have 6+ mana) and can pack a serious punch.

The Wheel of Doom voted into the game in the Best Of tournament some time ago hit some pretty large snags we didn’t expect. This meant we had to prioritize other things to make them ready for the upcoming Discord launch. We’re sorry about the delay, but are happy to inform you that it will be coming to Minion Masters in Update 81, as the Twitch event ends!