A new week, a new blog post, and... a new update waiting to be deployed on Wednesday, September 12th if everything goes to plan. The update will contain - amongst other exciting stuff - Player Avatars and balance changes. 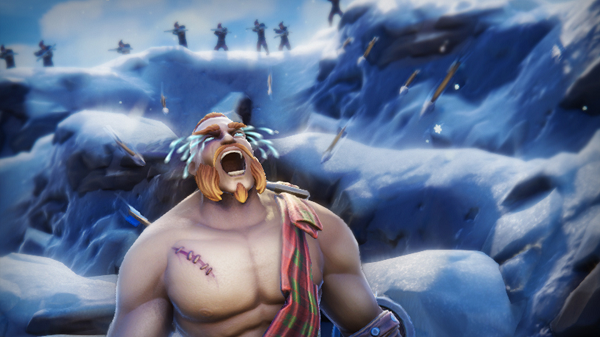 Who needs buffs, when there are nerfs?

Scott, our sensitive savage, is crying again. As you can see on the picture above, a sheer horde of Crossbow Dudes is shooting at him. He has no time to think about the fact that his damage has been reduced because he needs healing. Normally, he would have been looking for a Healing Shrine, because even if he is in enemy territory already, the range of these buildings was large enough, often. But things change as it seems, and all Scott can spot is a Healing Shrine out of range on the other side of the bridge he just crossed.

Now, you might think that things cannot get any worse for Scott, but you're mistaken, unfortunately. While he can see a Guardian coming his way, he also recognizes daggers raining from the sky. The Guardian is already damaged, but Scott estimates that he is very soon close enough to the Healing Shrine, which will heal the Guardian, protected from any harm by the Guardian's shield. Scott has no chance but watching in disbelieve how the Healing Shrine got destroyed by the daggers, while the Guardian only received little restoration.

Scott looks up in the sky, thinking about how much damage he could have caused to the enemy tower. Reduced or not, he knows that he is still capable of causing serious harm. The Guardian is still alive, maybe he can reach still reach him in time, and prevent his otherwise certain death. "Please no..." is all Scott can think as he hears a little noise right in front of him. He realizes quickly what that means: the Assassin arrived on the battlefield. You can't see them and they hurt a lot when attacking you out of nowhere. Scott heard rumors that they recently got new weapons. 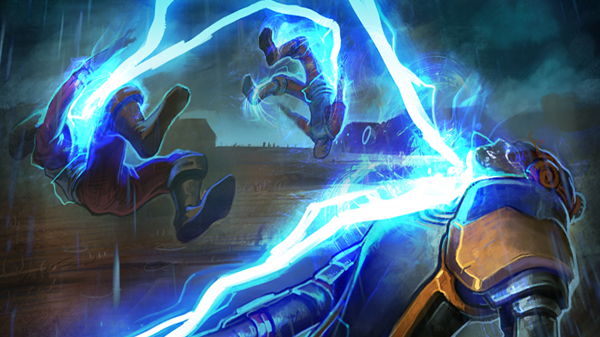 C-SAR would have been said that "AoE is the best". Scott is unsure if he did or not, as he was unable to hear anything else than the Guardian stomping behind him and a cracking sound near him. The Crossbow Dudes got electrocuted and the Assassin revealed by a Chain Lightning. But wait? Is the Assassin unable to move? He was unsure, as the Assassin was moving towards him in the blink of an eye later. Scott was finally protected by the Guardian and stopped crying. Out of nowhere, a sragon flew past them and Scott was asking himself how fast these little dragon can get.

A few moments later, Scott, protected by the Guardian and supported by a lightning-fast Xiao Long, got rid of the Assassin. On the other side of the arena, a Harbinger was tearing apart a Defenso Chopper, but Scott estimated that the Bounty Sniper would kill the Harbinger and get to work to shoot at the enemy tower Scott just arrived at...

While Minions have no idea about XP, the Bounty Sniper will trigger his Bounty with every shot at the enemy tower. The Chain Lightning stunned the Assassin for a short duration, indeed. And Xiao Long was much faster. Seems like Scott can see quite a lot while crying like a little baby. We hope that this short story pleased you while discovering the new, planned balance changes.

Without further talks, here are all the mentioned balance changes in an overview:
Now, we have one more change, we want to talk separately. It's a change we cannot test in-house only and want to test it with you, therefore.

A while ago we told you that we will look more into 2vs2 and thus several changes can be expected. While we are working "behind the scenes" on several aspects regarding 2vs2, we want to do a little experiment.
This change will bring 2vs2 on the same level HP-wise as 1vs1. While this might sound counter-intuitive at first sight, it opens up far better balance decisions and speeds up the duo matches. Most 2vs2 games tend to go to Perk 3 or even Mana Frenzy, according to our data. That hinders aggressive playstyles drastically, and also affects certain Masters more than others. Additionally, it prevents certain cards from being played at all. The change to the total health is not set in stone, meaning that we are open to adjusting/reverting it if the data gathered on the live server points towards it. Take it as an Early Access experiment and give us constructive feedback on the known channels plus STOMT.

Puh, this blog post is getting quite lengthy, isn't it? Fortunately, we have a far better way to answer all of your questions regarding Update 76, Player Avatars, and more than just reading a blog post! Tomorrow, September 11th at 18:00 UTC, That Sprite & Erythais will be live on Twitch streaming for you again & this time the special guest is nobody else than Mr. African Safari UncleOwnage. He will be assisting us in providing you with all the information about Update 76 and we cannot stress enough how ready he is to leak upcoming features regarding Battle Pass Season 3, as well as improvements such as the changes to Player Lobbies. Sorry Uncle, but I needed to leak that myself :P

And while at it, improvements to the Player Lobbies will make it so that you can browse menus while in a lobby, change your decks without leaving the lobby and much more! Came to our ears that some of you asked for that...

That's all for today, Masters! We're looking forward to seeing you tomorrow live on stream and maybe even meeting you on the flying arenas. Have a nice start to the week and use that Healing Shrine while it lasts :P