Hi all!
We hope you're enjoying the summer and wanted to give you an update on how things are going here at BetaDwarf along with a gift and some cool news :)

Here at the office we're super excited to see community made tournaments. The 6th King Puff Cup has just been announced and this ongoing initiative fills us with extreme energy, enabling us to do 10 squats every morning at scrum!
Thank you so much 3FFA, B4dhabit, Dipshit and HotDog <3
Join the cup here

Minion Masters for Xbox One - for fun!

We have partnered with Microsoft after one of their game scouts got to Platinum league in a weekend and afterwards eagerly reached out to us.
Quickly after that we struck a deal, and at E3 they announced that it would come to Xbox One and Win 10. Pc and Xbox will have cross play and share player base, so it will be one big happy family :)

We have spent most of our development time on Team Battle for MM. Since early on the community has been making around six million posts per day about adding Team Battle to the game. 4 months later one of us randomly noticed one of those posts, while looking for Mana Puff fan art ;)
The posts convinced us and now we're really psyched to finally see how it works in the team battle event, and we will then use whatever we learn from this event to iterate on it, and ultimately release it as an awesome new permanent mode in the game.

From left, Kristian (Programmer), Peter (Designer), Steffen (CEO).
Trying out lunch in the sun - which makes us sympathize with Vampires!

- Alex (Animator) has tried out crossfit after years of regular weight lifting and is by far the strongest dwarf on the team now (6'4" 200 lbs).

- Steffen (CEO) has started playing a ton of co-op board games with his girlfriend. (The secret plan is that this is a build up to make her skilled at strategy games and ultimately enable her to play MM).

- Kenneth (Lead Programmer) had a weeks vacation in Turkey where he broke his toe and destroyed his phone as apparently it wasn't one of those that could capture underwater pictures in the swimming pool...

- Martin (Lead 3D) has ordered desk fans for everyone, to cope with the stifling heat in the Dwarf Fortress. Note that he uses 6 screens, so maybe that's why he was sitting in a pool of sweat and consequently took the initiative to get some proper air circulation going. Modern technology is great!. 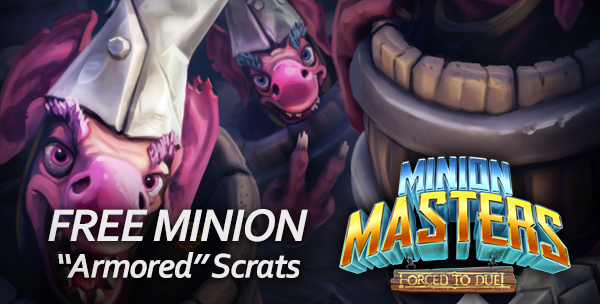 
A gift for you - Armored Scrats for Minion Masters!

We've made a code for you as our dear ready, to be used in Minion Masters for a limited time period, as a reward for reading our blog.

Use this coupon code within Minion Masters:


To use the code, enter it in the in-game shop. Look for the “redeem code” button in the top right.

You can now play with friends or with strangers. You have two new individual league rankings for team battles, and both can give rank rewards!

ON ALL OUR GAMES!

Have you tried all the games in the FORCED universe?

Have a great summer!