We've got more of a look at the upcoming features in Version 1.3 as well as the new Tri-Team Tourney that lets you vote for a card we'll be making in a future update. 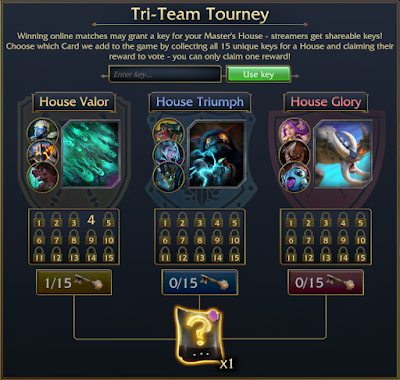 The return of our card voting format is here! Similarly to the way our Card-House Contests have worked, the Tri-Team Tourney has you collecting keys for your favoured house and receiving a Legendary card from the first team you open the chest for. We've got Mal'Shar and Taurus making their return appearances from the previous tournaments, and with a new contender Ghost Storm picking up the flag for House Valor. Here's the teams and their respective cards:

Your prize for voting for your card of choice will be a random Legendary card. Remember, you can only vote for one of the three teams! Look forward to the contest in Version 1.3.

We've decided to mix things up a little and give a full overview of what can be expected in Version 1.3 - These are the features we're aiming to include, though note that some of these may end up being delayed. Here's what we're planning for the next update:

Most of these are fairly self explanatory, but expect to hear more about them in the coming weeks!

The Fifth King Puff Cup Season is just around the corner, with King Puff Cup 34 just recently being announced with a date of July 6th, 2019! We can expect to see the familiar faces that ran a fantastic circuit in the fourth season reprise their roles with the new Sideboard format tested in the Prince Puff Cup series! The sideboard format allows players to submit 8 additional cards that can be swapped into their decks as they wish to adapt to strategies or pull surprises out of the bag, and has already proven to be quite popular with the high-level Minion Masters players. The prize pool hasn't been announced yet, but there is a promise from Julaiwnl that it'll be coming "really soon", so keep your eyes peeled for that.

Interested in signing up? Check out the Toornament page for KPC 34 here, and follow the KPC Twitch channel!